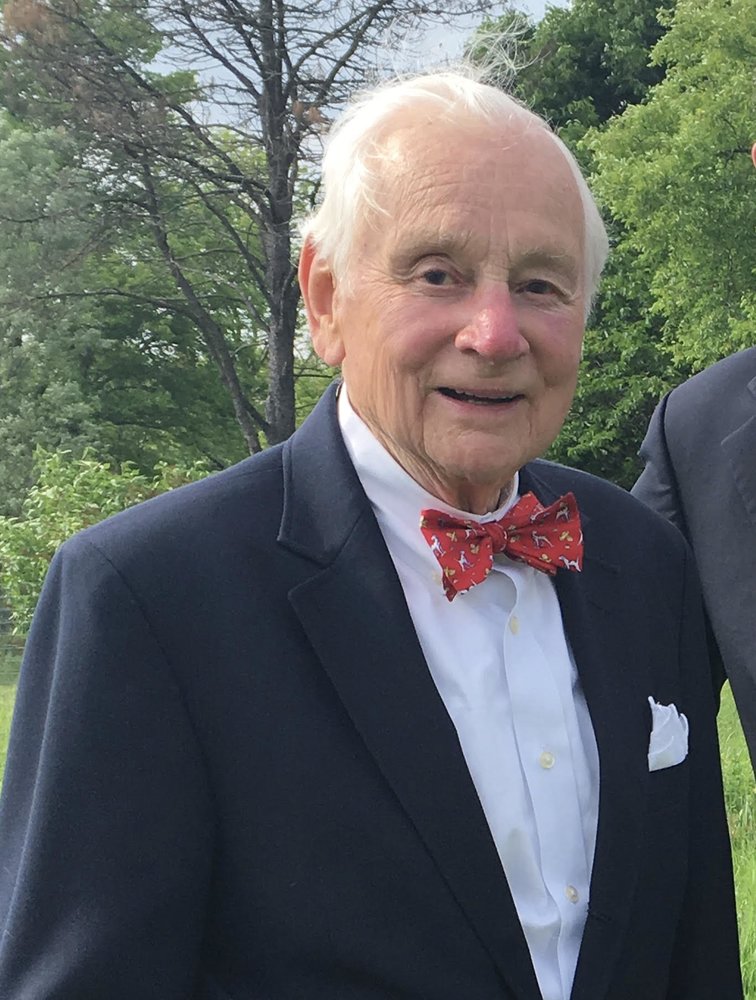 Born on February 22, 1925 in Glen Ridge, New Jersey, Mr. Buchanan was the son of the late Doris Van Dyk Buchanan and Ray Buchanan.  He grew up in Montclair where he attended Montclair High School; in 1942 he enlisted in the Navy, which sent him to Glenwood Springs, CO where until 1945 he assisted with physical therapy for soldiers wounded in the Pacific.

Mr. Buchanan graduated from Colgate University in 1950, where he majored in economics and was a member of the Beta Theta Pi national fraternity. He was hired by National Newark & Essex Bank—which became Midlantic National Bank and ultimately PNC—where he rose to the position of Senior Vice President before retiring in 1987.  During his 36 years with the same commercial lending bank, Mr. Buchanan personally acquainted himself with just about every business and organization throughout New Jersey.  He claimed that the secret to his success stemmed from college:  He stood in the fraternity house lobby and introduced himself to everyone who arrived for a gathering, where he made it a point to remember everyone’s name.

Mr. Buchanan married the late Elizabeth “Betty” Jean Babbage on May 16, 1953 in Glen Ridge, New Jersey.  The couple lived in Upper Montclair where their four children were born.  In December 1966 the family moved to the rural community of Mendham Township, and the 1724 farmhouse named Pine Hill.  For the next 38 years they cared for the property and hosted scores of gatherings. After Betty passed away on November 19, 2004, Mr. Buchanan transferred ownership of the home to his youngest son.

Proving that it’s never too late for a new chapter in life, Mr. Buchanan met and married Shirley Randels Floyd on April 28, 2007 at Silver Bay, New York.  Together the couple maintained residences in Mendham and Williamsburg, VA while they traveled, entertained, and enjoyed their combined family of more than 40 members.

Mr. Buchanan was an avid supporter of the Colgate football team. He was also a lifelong skier who enjoyed the slopes with his grandchildren.

Mr. Buchanan always believed in the importance of giving back to his community.  He served numerous nonprofit organizations and undertook fundraising wherever it was needed, including several campaigns for The First Presbyterian Church of Mendham (Hilltop Church), of which he was an active member for 54 years.  While living in both Montclair and Mendham, he was chairman of the Robert Treat Council of Boy Scouts.  He spent 18 years on the Mendham Township Planning Board, during a crucial period of Mendham’s development.  But he was most proud of his role as a founding trustee of the Liberty Science Center and the New Jersey Land Conservancy, which are both now an integral part of New Jersey’s heritage.

A private burial will take place at Hilltop Church in Mendham, with a public memorial service and gathering fall 2020.  In lieu of flowers, friends are invited to make donations to the Mendham Township First Aid Squad (PO Box 122, Brookside, NJ 07926 or http://www.mtfas.org/); or the First Presbyterian (Hilltop) Church of Mendham (14 Hilltop Road, Mendham, NJ 07945 or https://fpcmendham.breezechms.com/give/online)

or the organization of their choice.

Share Your Memory of
Russell
Upload Your Memory View All Memories
Be the first to upload a memory!