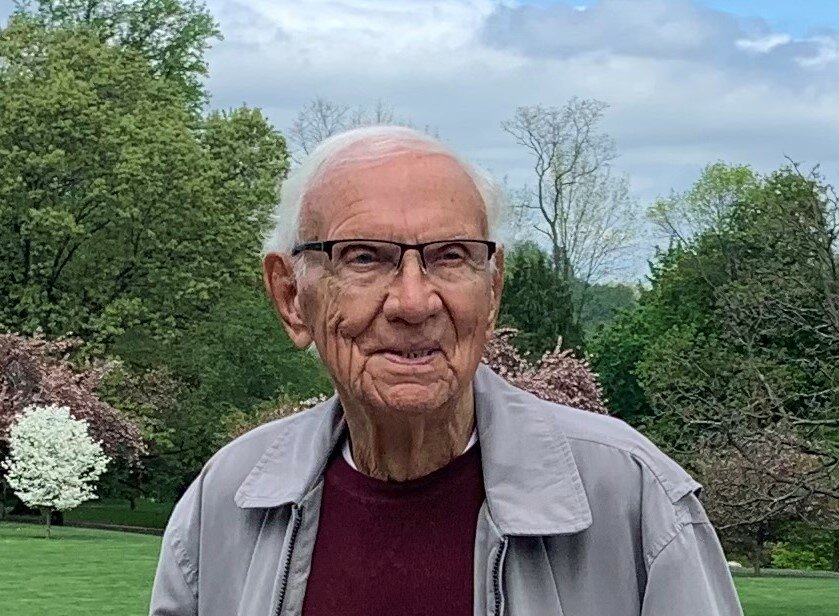 To attend mass virtually please use the following link https://boxcast.tv/view/bruce-legan-funeral-znzfyqocos2m0xclv2yz

Bruce Legan passed away on Dec 31, 2022 at Robert Wood Johnson University Hospital Somerset in Somerville, NJ, he was 100 years old.

Born in Bridgewater, Massachusetts, he lived in Massachusetts and Pennsylvania before moving to New Jersey to the towns of Maplewood, Short Hills, Far Hills and Bedminster in 1988.

He served in the Navy from 1943-1945 during WWII as a Communications Officer and was a graduate of Harvard University.  Bruce had a successful computer sales career working for Remington Rand, Texas Instruments General Automation and Prime Computer until his retirement.  He then worked in his son’s business, the Chelsea Brewing Company in New York City before he officially retired again at the age of 90.  He was a member of St. Joseph’s Church choir since 1989 and loved to sing.

Bruce was an inspiration to all who knew him.  He would strike up a conversation with anyone, he was generous, kind and giving.  He attended every family event, he regularly traveled throughout the US with family and valued the time together.  He always thought of others, giving clothes and household items to those in need and donating his time to help charitable causes, especially the Alzheimer’s Association.

He was predeceased by his wife Cecilia in 1987 and his siblings John Legan, Stan Leganowicz, Edna Lloyd, Katherine Bertelli, Mike Legan, Valerie Falese and Raymond Leganowicz.

He is survived by four sons; Bruce Legan (Karen) of Wilton, CT, Peter Legan (Leslie) of Hinsdale IL, Tom Legan (Brian Dean) of Annadale, NJ, Stephen Legan of New York City and one daughter, Marianne Szeluga of Bedminster, NJ.  He is also survived by his 9 grandchildren and 2 great grandchildren.

Visitation will be held on Thursday, January 5 from 4:00pm-6:00pm at the Bailey Funeral Home of Peapack, 176 Main Street, Peapack.  The funeral mass will take place on Friday, January 6 at 12:00pm at St. Joseph Church, Mendham. To attend mass virtually please use the following link https://boxcast.tv/view/bruce-legan-funeral-znzfyqocos2m0xclv2yz   Interment will take place at Immaculate Conception Cemetery, Montclair.  In lieu of flowers, donations to the Alzheimer’s Association in Bruce’s memory would be appreciated.

Share Your Memory of
Bruce
Upload Your Memory View All Memories
Be the first to upload a memory!
Share A Memory