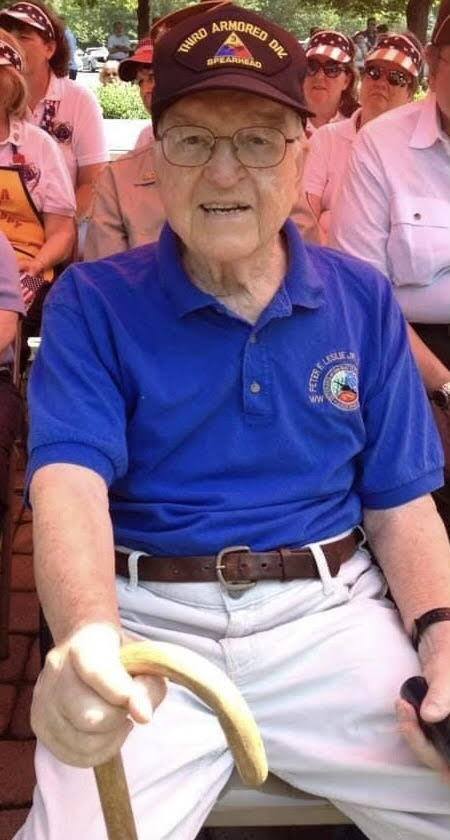 The family of James K. Cullen announces his passing at the magnificent age of 99. Born in Scotland, he came to the United States as a young boy, and the family settled in Brooklyn, NY.  When World War II began in Europe, Jim immediately attempted to join the U. S. Army Air Corps but was initially rejected for being a non-citizen. After the U.S. entered the war, Jim was accepted into the U.S. Army, ultimately earning the rank of Staff Sergeant in the 3rd Armored Division, “Spearhead.” He was awarded four battle stars: the Normandy invasion, Northern France, Ardennes (the Battle of the Bulge), and Germany. He was wounded twice in combat, earning a Bronze Star Medal, Purple Heart with Oak Leaf Cluster, the Combat Infantryman Badge, the Belgian Fourragère of 1940, and the French Legion of Merit. While serving his country, he gained U. S. citizenship and was an extremely proud American forevermore. Jim returned home after the war and used the G. I. Bill to attend college, graduating from Colgate University. His career led him to Keuffel & Esser Co. in Hoboken, NJ, where he met Carol, now his wife of 63 years. They relocated many times across the country, having two children along the way, until Jim’s promotion to National Sales Director brought the family back to NJ to stay. After retirement, Jim’s love of sailboat cruising took him on adventures up and down the East Coast with several fellow sailors, always returning home with a lot more facial hair than when he left!

With the arrival of his grandchildren, Allegra and VJ, he became known as “Grandpa Jim” and served on weekly daycare duty, chauffeuring and going on numerous adventures with them, enjoying every minute of it.  He accompanied Allegra and VJ on sailing trips around New York City and shared his love of military history with VJ, attending WWII re-enactments together.

Later in life, he joined and became President of the regional Veterans of the Battle of the Bulge chapter. Along with fellow veterans in the group, Jim embarked on educational visits to high schools throughout the region, giving students firsthand accounts about WWII so they could recognize the impact of the war upon modern history.  An avid reader and English major, he had written many notes about his wartime experiences. Upon the urging of his family, at age 95 he published a book about his experiences during World War II.  His book, Band of Strangers, is highly rated and still selling well in local bookstores or via Amazon. After his book was published in 2018, he was honored to receive the Legion of Honour (the highest French order of merit for military) presented to him by the French Consulate in New York City.  He was featured on Belgian television and interviewed by military scholars from around the world.

A celebratory gathering to remember Jim will be held in Roxbury, NJ on September 25. Please contact Cathie at ckmiller1961@gmail.com for more information.  Memorial donations to the Tunnel to Towers Foundation T2T.org would be appreciated.

Share Your Memory of
James
Upload Your Memory View All Memories
Be the first to upload a memory!
Share A Memory