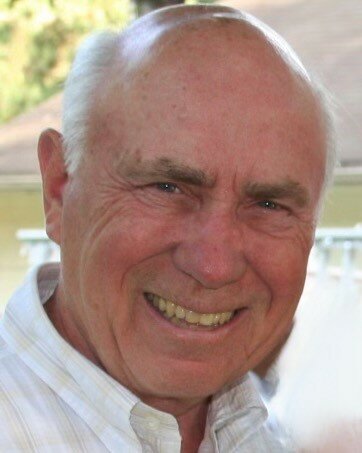 Thomas D. Lanahan moved on from this life on April 14, 2022. He was born September 20, 1940 in Queens, NY. His Family moved to Cedar Grove, NJ where he spent his teen years. He attended Bloomfield High School, where he met his wife, Peggy (O’Donnell) After they were married in 1961 he worked as a printing pressman for the Newark Star Ledger while attending Newark State College (now known as Kean University). Tom was a middle school science teacher before establishing his own insurance agency. Tom and Peggy began raising their family in Denville, NJ, later moving to Mt. Lakes, NJ, and eventually settling in Lloyd Harbor, NY where Tom ran a successful insurance agency for Mutual of New York (MONY). His career with MONY took him back to New Jersey where he finished his career running a successful financial services firm with John Hancock based out of Morristown. He was also involved with Rotary, rising to President of the Morristown chapter. He loved the many relationships and good work that he experienced with the Rotary. Tom’s proudest accomplishment was his family; he was always quick to share his children’s achievements.

Tom was someone who never did things halfway. He got his first taste of sailing in Mt. Lakes and quickly became Commodore of the Sunfish fleet, taking his family up and down the Northeast to various regattas. After moving to Lloyd Harbor, Tom moved up to bigger sailboats and took great pride in his Bristol and enjoyed many summers sailing the Long Island Sound and in New England. Shelter Island, NY became Tom and Peggy's home port. They enjoyed hosting friends and family at their home overlooking Peconic Bay. It was there that Tom re-kindled his love of golf at Gardiner’s Bay CC, When Tom and Peggy re-located back to NJ to be closer to friends and family, Tom joined Mendham Golf and Tennis (MGT) and was involved in various committees that left a lasting impression on the Club. Tom became a USGA rules official and could offer guidance on any decision in the game of golf.

Tom will always be remembered by his family as ‘The Wizard’. There wasn’t a story, a fact, or rule, that he didn’t know.

Upon retirement, Tom and Peggy headed south to the Landings on Skidaway Island outside of Savannah. Tom spent many days enjoying the various courses at The Landings, becoming an active member of the golf association and creating more memories and stories to share. If you knew Tom, he’d tell you “Don’t cry for me, have a laugh, share a hug, and live.”

Tom leaves behind his high school sweetheart and soulmate Peggy, and their four devoted children: Kevin (Megan), John (Claudine), Colleen Gecawich (Bill), and Thomas (Peg). Tom is also loved by his 12 grandchildren and took great pride in all they are accomplishing and the accomplishments yet to come: Kelli Anne, Ryan, Jack, Molly, Patrick, Erin, Christopher, Timmy, Danny, Emily, Cate, Michael, and all his nieces and nephews. He is also survived by his brother Robert Lanahan (Judy), sisters Dee Aloia (Richard - deceased) and Pegeen Lizzi (Luce). He is predeceased by his infant daughter Margaret Mary, and his brother James.

Donations in Tom’s name may be made to GEM (Get Excited and Move), Parkinson's Support, Anderson Cohen Weightlifting Center 7232 Varnedoe Drive, Savannah, GA 31406, and to your local non-profit hospice. A life-long learner, Tom would encourage you to educate yourself on the quality of care in assisted living and memory care facilities.

A Private interment will be held at The Gate of Heaven Cemetery, East Hanover, NJ.  A memorial Mass will be held at St. Joseph Church in  Mendham, NJ on June 4th at 11am.

Share Your Memory of
Thomas
Upload Your Memory View All Memories
Be the first to upload a memory!
Share A Memory