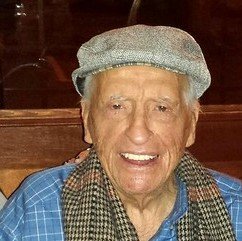 Bernie was born on November 19,1919 in Scotch Plains, one of nine children of Louis and Maria DeCristofaro. He graduated from Scotch Plains High School and then continued his education with a business degree at Drake’s Community College.

He married Laura Bruno in 1940. They moved to the Germania Park area of Rockaway Township in 1946, where they would live for the rest of their lives surrounded by a wonderful neighborhood of friends.

He worked for McGregor Sportswear for 41 years. He started as a foreman in the finishing department and worked his way up to the Vice President of the International Division, for which he travelled extensively throughout Central and South America. During his career he was responsible for training employees on new technology and overseeing the quality and production at plants across the Western Hemisphere. After McGregor’s closed, he worked for Weiner Industries in Paterson for an additional ten years.

He enjoyed golfing at charity tournaments, bowling with the Elks Club in Dover, and cheering for the New York Yankees.  Once he retired, he loved making homemade pasta with sauce, and planting his tomato and pepper gardens in his backyard.  "Pop" had an infectious personality, enjoyed going to the Pastime Club to have a beer with the boys, and was always the first on the dance floor at a party.

He was predeceased by his wife, Laura, his granddaughter Kimberly Saul, and his grandson Nicholas DeCristofaro. He is survived by his daughters Mary Ann Guilmette and her husband Richard, and Bernadette Hill and her husband Jim; and his son Bernie DeCristofaro, Jr. and his former wife Donna and his wife Kristeen.  He is also survived by his sister, Lena Pontura; his grandchildren Scott Guilmette, Kim Garay, and Allison McColligan; and his great-grandchildren Ashley, Kelly, Ryan, Erica, Devan, Gavin, Cole, and Kylee.

Visitation will be held on Tuesday, June 8th from 4-8 pm at the Bailey Funeral Home, 8 Hilltop Rd., Mendham. A Funeral Mass will be celebrated on Wednesday, June 9th at 10:30 am followed by interment at Locust Hill Cemetery.

In lieu of flowers, donations may be made to Market Street Mission in Morristown, Saint Jude's Children's Hospital, or the Rockaway Township Police Department.

Share Your Memory of
Bernard
Upload Your Memory View All Memories
Be the first to upload a memory!
Share A Memory