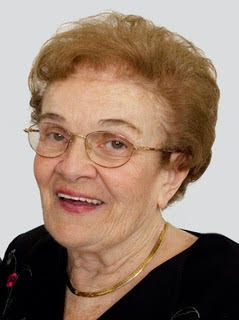 Kathe was born on March 29, 1926 in Guttenbrunn, Romania to Adam and Magdalena Reiss. Her parents immigrated to the United States in the years before World War II while she stayed behind to be raised by her grandparents.  On October 15,1949 she married Herwig Herzmansky.  They immigrated to the United States in 1952.  They moved to their brand new house in Dumont, NJ in 1963.  Kathe took great pride in her family and provided a beautiful and comfortable home.  She was devoted to her husband, daughters and grandchildren.  When her daughters grew up, she established herself as an accomplished jewelry salesperson.  After her husband died in 2017 she moved in with her daughter and son-in-law in Mendham, NJ.

Kathe was a woman of great resilience.  She overcame many hardships in her early life.  Kathe was known for her honesty, straightforwardness, and attention to detail. She was an avid reader and loved to correspond with relatives in the US and Europe.

A memorial service will be held at a later date.

Share Your Memory of
Kathe
Upload Your Memory View All Memories
Be the first to upload a memory!