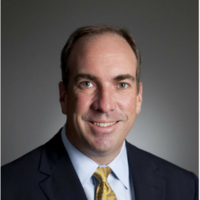 Daniel P. McCarthy of Mendham, NJ, passed away peacefully on January 14, 2023, after a brave fight against cancer.  Dan, born June 30, 1967, was the proud and loving father to Olivia and Caitlin (Cate) and the son of Mary and Daniel McCarthy. He grew up in the Bronx and Yonkers and enjoyed several summers in Ireland at the homes of his grandparents.  After graduating Fordham Prep, he attended Fordham University (with the help of a caddie scholarship) and earned an MBA from NYU Stern School of Business.

Dan’s happiest moments in life were shared with his daughters. Whether he was preparing their favorite meal or teaching them “his” way to solve a math problem, he was proud to be their mentor and protector.

Family and friends will also remember Dan’s deep love of golf because it gave him so much joy.  His life long passion began as he caddied at Quaker Ridge GC and grew as he became members of three golf clubs - Montclair GC, Ballybunion GC and Enniscrone GC.  Dan had a very successful career in the health insurance industry with Empire Blue Cross and HealthFirst (President and COO). He later used his extensive industry knowledge as Interim President of Metropolitan Health Network and as CEO of SOMOS Innovation.  Dan was even more successful in life as evidenced by the scores of close friends he made thanks to his kind heart and strong personality. He had a passion for cooking and entertaining and perfected his culinary skills with pork BBQ, chicken parmesan and wood fired pizza, just to name a few. His family will forever be grateful to those friends for their love, support and help during Dan’s time of need.

He was adored and will be deeply missed by his daughters Olivia and Caitlin, his sister Anne, brother John and sister-in-law Jennifer McCarthy.  Uncle Dan will also be missed by his nieces Meaghan, Brighid and Muriel Shea; Sarah, Grace and Caroline McCarthy; and his nephew John (Jack) McCarthy. He is survived by his aunt Margaret (Peggy) O’Sullivan, his uncle Martin Bryce and many cousins in the U.S.A. and Ireland. Dan is also survived by the mother of his daughters, Noelle Shea, and his loving partner of the last several years, Theresa Riordan, and will be missed by their families and friends as well.

Visitation will be held on Friday, January 20th from 4-8 pm at the Bailey Funeral Home, 8 Hilltop Road, Mendham. The Funeral Mass will take place on Saturday, January 21st at 9:30am at the Church of the Assumption, 91 Maple Ave., Morristown, NJ.  Interment to follow at Gate of Heaven Cemetery, Hawthorne, New York.  In lieu of flowers donations in his memory can be made to Cholangiocarcinoma Foundation and to NJSGA Caddie Scholarship Foundation .

The Mass will be live-streamed. Click on the following link for the homepage of the parish website and scroll down to the white box that says “live”, picture attached.  If you click on the link a few minutes before 9:30am, you will see and hear the Mass.  It can also be accessed and viewed at a later date/time.