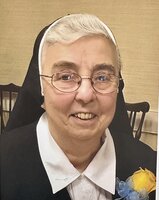 Sister Nicholas attended St. Benedict Grammar School in Brooklyn where she was first introduced to the Sisters of Christian Charity, and then on to Cathedral Annex in the Bronx and Immaculata High School in Mendham, and finally Assumption College for Sisters in Mendham, NJ. Her desire to become a Sister was fulfilled when she entered the Community as a candidate on September 3, 1950.  Sister received her Holy Habit on August 21, 1953, and went on to profess her Final Vows on August 21, 1959.

Sister Nicholas’ ministry throughout her life was varied.  Although Sister preferred a homemaking ministry in the convent, her ministries also included teaching in grade school.  Sister taught in Jersey City, NJ, Chatham, NJ, Philadelphia, PA, Bronx, NY. Kingston, NY, and Hackettstown, NJ.  Her homemaking career was also very extensive and varied from portress, to sacristan, to housekeeping, to retreat ministry at Villa Pauline, to hospitality coordinator, to local coordinator, and to providing Motherhouse service in her final years.

Sister Nicholas was the epitome of hospitality and cordiality to all she met. A real combination of Martha and Mary in the spirit of the Gospel.

Sister was predeceased by all her brothers and sisters:  Vincent, Emma (Finley), Salvatore, Frances (Galatolo), Carmella (Fiore), Michael, and Anthony.  Among her living relatives are brother-in-law, Joseph Fiore and sister-in-law, Ann Campasano and many nieces, nephews, great-nieces, and great-nephews.

Viewing will be Friday, October 28, 2022, starting at 1pm with Evening Prayer at 7:00 PM in the Chapel of Mary Immaculate, Motherhouse, Mendham, NJ

Liturgy of Christian Burial will take place on Saturday, October 29, 2022, at 11:00 AM at the Motherhouse with burial at Holy Cross Cemetery on the Motherhouse property.

The funeral will be livestreamed on our website: www.scceast.org

In lieu of flowers, donations in memory of Sr. Nicholas may be made to the Sisters of Christian Charity, Mendham, NJ.