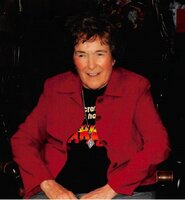 Born in Mendham, NJ to Antonio and Philomena (née DelBene) Cillo, Theresa was a lifelong resident and one of ten children. After graduating from Morristown High School in 1946, she entered the workforce. Her brother Anthony, while in the Navy, returned home on leave and introduced her to his friend, Jack Smith. Theresa and Jack began dating shortly thereafter and were married on November 23, 1952. Over the course of their 68-year marriage they had seven beautiful children together. Theresa spent her life being a devout Catholic and was a longtime parishioner of St. Joseph Church in Mendham.

Theresa was an avid reader and loved to travel, one of her favorite destinations being Italy. She enjoyed going for long walks and spending time outdoors. After working for Morristown Medical Center as an Administrative Assistant in the pharmacy department for 33 years, she retired only nine years ago at the age of 82. She devoted her retirement to spending time with her grandchildren and great-grandchildren.

A visitation will be held on Monday, August 1 st , from 3-7 PM at the Bailey Funeral Home (8 Hilltop Road, Mendham, NJ 07945). A Funeral Mass will take place on Tuesday, August 2nd, at 11 AM at St. Joseph Church (W. Main Street, Mendham). Mass will be live streamed and can be viewed by following this link: https://boxcast.tv/view/theresa-a-smith-ajvxsjszogrpshapjuiy. Interment will follow Mass where Theresa will be laid to rest alongside her husband in the St. Joseph Church Cemetery. In lieu of flowers, donations in Theresa’s memory may be made to St. Jude Children's Research Hospital.