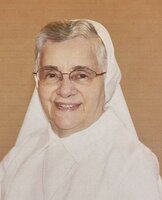 Sister Marietta DiNunzio, nee Concetta DiNunzio, Sister of Christian Charity, entered eternal life on January 20, 2022, at the Motherhouse in Mendham, NJ, at the age of 93.

Sister Marietta was born in Philadelphia, Pennsylvania, on December 8, 1928, to her loving parents Camillo and Elodia (Sacripante) DiNunzio. Sister attended St. Donato’s School grades 1-8 and then attended West Philadelphia Catholic Girls’ High School.  After completing her junior year, Sister decided to enter Immaculata High School in Mendham, NJ, where she entered the Sisters of Christian Charity on August 31, 1947.  On August 21, 1950, Sister professed her First Vows and on August 20, 1956, professed her Final Vows.

Sister Marietta received her B.S. and M.A. in Education from Seton Hall University.  Sister was known as an excellent primary grade teacher who dedicated the first 22 years of her teaching career to these little children.  The next 14 years were spent teaching grades 4 and 5. Sister Marietta taught in elementary schools throughout the Tri-State area of New York, Pennsylvania, and New Jersey.  Once retired from education, Sister did some clerical work in Divine Providence Hospital and Bishop Neuman High School in Williamsport, PA.  Sister Marietta, along with her twin sister, Sister Theresa DiNunzio (also a member of the Sisters of Christian Charity), had the great joy of participating in a Spiritual Renewal Program in Rome and Germany in the summer of 1999.  In 1994 both Sisters retired to Holy Family Convent in Danville, PA, and in 2018 both Sisters in retirement moved to Mendham, NJ, where they remained until the present.

The Liturgy of Christian Burial will be celebrated at the Motherhouse Chapel of Mary Immaculate in Mendham, NJ, on Monday, January 24, at 11:00 AM, with the interment to follow in the Motherhouse Cemetery.

Memorial donations can be made in memory of Sister Marietta to the Sisters of Christian Charity, 350 Bernardsville Road, Mendham, NJ 07945.