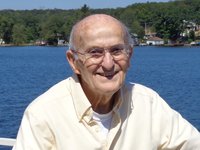 Born in Penn Township, MI to parents Doral and Ida (nee Tyler) Smith, Jack graduated high school and enlisted in the United States Navy shortly thereafter. He served his country proudly from 1948 to 1952. Once honorably discharged, Jack settled down in Mendham, NJ that same year. He was a devout Catholic and a longtime parishioner of St. Joseph Church in Mendham.

Jack was handy and worked as an automotive technician in many Ford dealerships, including Douglas Ford in Summit, NJ. When he wasn’t working, he volunteered most of his time to the Mendham Fire Department. His favorite activities included camping trips with his family and embarking on cruise ships in his later years. What he loved most though was spending time with those around him, friends and family alike.

Jack will be laid to rest in St. Joseph Cemetery, located on W. Main St. in Mendham, NJ. A Memorial Mass will be held at a later date that is to be determined. In lieu of flowers, donations in Jack’s memory may be made to St. Jude Children’s Hospital www.stjude.org.