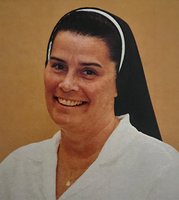 Sister was 50 years of age.

Born in Cortland, NY, June 6, 1969 Sister Christina Marie (Kimberly Ann) was the daughter of Philipp and Marion (Cservak) Cables.  Sister entered the Sister of Christian Charity on September 6, 1987 and professed her first vows on August 16, 1991 and made her final profession of vows on August 15, 1997.

Sister Christina Marie spent her early years in religious life as a school teacher in Pennsylvania.  In 1998 she began Nursing Studies at Misericordia University and worked at Mercy Hospice in Scranton.  In August 2003 she worked as a Nurse Practitioner within Holy Spirit Health System, Harrisburg and then transferred to Williamsport serving as Nurse Practitioner at River Valley Health and Dental Center. In April 2019 she was assigned as Director of Nursing/Heath Care Administrator at the new Motherhouse in Mendham.

Sister Christina Marie is survived by her mother, Marion, her sister, Allison and brother-in-law Mark, her brother Adam and his wife Rebecca and nieces, Leah, Sarah, Ava, Kassi, Eddy, and Katelyn.  She was pre-deceased by her father, Philipp and her sister, Christine.

Interment in Holy Cross Cemetery on the grounds of the Motherhouse will follow the Liturgy.

In lieu of flowers, donations in memory of Sister Christina Marie can be made to the Sisters of Christian Charity, Mendham, NJ.