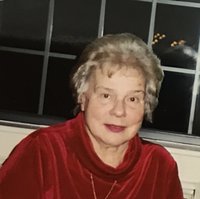 Lidia Kawecki passed away peacefully on August 22, 2019 at age 90. She is survived by her beloved daughter Alicja.

Born in Lvov, Poland to parents Julian and Domicela (nee Sekunda) Cionka, Lidia was among the hundreds of thousands deported to labor camps in the Soviet Union during WWII but was among the fortunate who were evacuated to the Middle East in 1944.  She completed her education in Ain-Karem, in then Palestine, at a high school created under the protection of the Polish Army. It served as a refuge for girls, half of whom were orphaned or traumatized. At this school she forged many precious lifelong friendships. The end of the war found her in England, resettled by 1947 with her parents at Tweedsmuir Camp in Surrey, which served as a temporary home for Polish refugees under the auspices of the British War Office.  Lidia received a scholarship to Guildford College in Surrey where she completed her Associate Degree in Business. Shortly thereafter she married Jerzy Kawecki, a longtime childhood sweetheart whom she first met in a labor camp in the Soviet Union during the war. In 1954 Lidia, Jerzy and daughter Alicja sailed across the Atlantic on the SS Arosa Star to start a new life in Montreal, Canada where they lived for 8 years before moving to the United States. Residing briefly in Syracuse, NY, the family ultimately settled in Burlington, Massachusetts. Lidia enjoyed a very rewarding long-standing career as Executive Assistant to the VP of International Publishing at Addison-Wesley before retiring to her beloved Cape Cod with her husband in West Yarmouth. Widowed in 2001, Lidia moved to Mendham in 2004 to enjoy her golden years with her daughter – which she did to the fullest.

Lidia had a boundless passion for life, a profound religious faith, and staunch resiliency. All who knew her cherished her ever positive attitude, effervescent laughter, and witty sense of humor. She always had a smile on her face, a twinkle in her eye, and a warmth that radiated from her. Always ready to reach out her hand to comfort, help, support.  When entering her home, you felt warm, comfortable and very much loved.

An accomplished classical pianist and fluent in several languages, Lidia loved music, the arts, books, travel and quiet time by the sea. A passionate gardener, she also excelled in beautiful old-fashioned handiwork, crocheting and knitting for many hours to her heart’s content.  Making traditional Christmas ornaments with her daughter was a favorite pastime. She loved to entertain and have friends around her. Her culinary skills were legendary:  whether it was just a simple meal for 6 or a lavish soiree for 50-75 people.  Lidia lived to share, and give to others – it was at the very core of her being.

She will be remembered as “such a sweet lovely lady – always smiling – so happy”.

A Funeral Service will be held on Thursday, August 29at 11 AM at the Chapel at Somerset Hills Memorial Park, immediately followed by a burial of ashes at the Memorial Park, 95 Mt Airy Rd, Basking Ridge, NJ 07920. In lieu of flowers, donations in Lidia’s name can be made to Sts. Cyril and Methodius Roman Catholic Church, 215 Hill Street, Boonton, NJ 07005.